One of my favorite parts of Autumn is the variety of winter squash that start to show up in the markets.  The only issue is that these incredible fall staples can be a bit of pain to process—hence the popularity of those cans of pumpkin that start multiplying in the baking aisle this time of year.  It’s not really that hard to skin and whack up a pumpkin or butternut and to toss those chunks of orange gold into a pot of soup to infuse the house with their incredible, rich, silky-sweet aroma—and that’s before you eat it!—but it still takes some time.  Enter the spaghetti squash—the easiest of all the winter squashes. 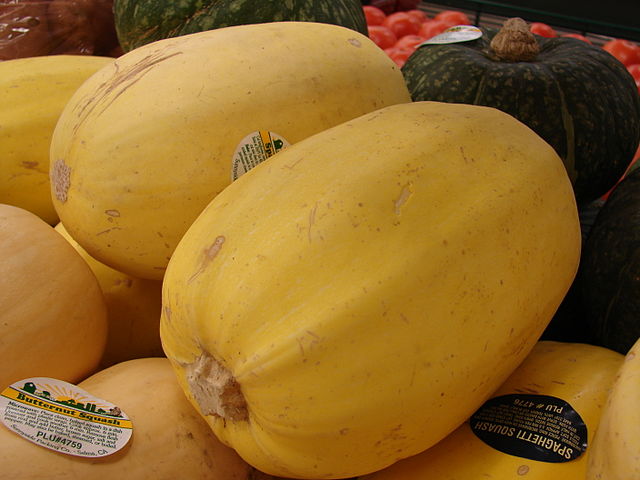 I have to admit, I used to hate these things.  Someone told me that you just cook them, and put some red sauce on, and it’s just like spaghetti.  It ain’t.  Unless you like butternut or pumpkin with marinara, that’s probably going to be a big disappointment, which might put you off the stuff for years.  Spaghetti squash taste like any other winter squash or pumpkin, just in a rice-noodlish format.  Once you roll with that, everything is good.

The easiest way to prepare spaghetti squash is to roast it until done at 350F (30-90 minutes, depending on the size), let it cool a bit, and scrape it out of its skin.  Total active cooking time? 10 minutes, tops.  Unlike other winter squash, spaghetti squash comes right out of the skin, so there is no waste at all.  You end up with a mound of veggie noodle, and some choices:  Do you toss with some butter and/or olive oil, a pinch of salt, crack of pepper, and some Parmesan?   This makes an intoxicating golden mound of goodness, perfect for serving with the season’s other treasures (turkey, bratwurst, braised cabbage, and…why is the keyboard wet?).  Or, do you create a squashy spin on latkes?

Preheat oven to 350F.  Cut squash lengthwise and remove seeds.  Roast for 30-90, depending on the size of your squash, until the skin yields.  Let the squash cool until you can handle them without burning yourself.  Scrape the flesh out of the skin into a bowl and toss with butter and/or olive oil, and parmesan,  salt, and pepper to taste.

Or, you could get fancy and make…

Combine the first 4 ingredients while you heat a heavy pan (cast iron works great) over medium heat.  You’ll want the pancakes to cook fairly slowly, so that the veg cooks all the way through by the time your cakes are golden brown.  You can have higher heat if your veg are precooked, like the spaghetti squash.  It’s also important to not have the temperature too low, or the food will soak up the oil…properly fried food shouldn’t really be oily!  At any rate, practice makes perfect, and the mistakes are pretty darned good, too!

Once your pan is heated through, add a very thin layer of oil to the pan, and drop scant 1/4 cup’s worth of the mixture to make the pancakes.  Only do two or three at a time so they don’t crowd in the pan and get soggy.   Leave for several minutes (you get a better crust if you leave it alone, instead of fiddling, at this point) until golden brown, the flip and repeat.  Drain the cakes on brown paper bags or paper towels.  We like ours with applesauce, rich whole yogurt, and good beer.

Recipes Contributed by the Dongarra Family.